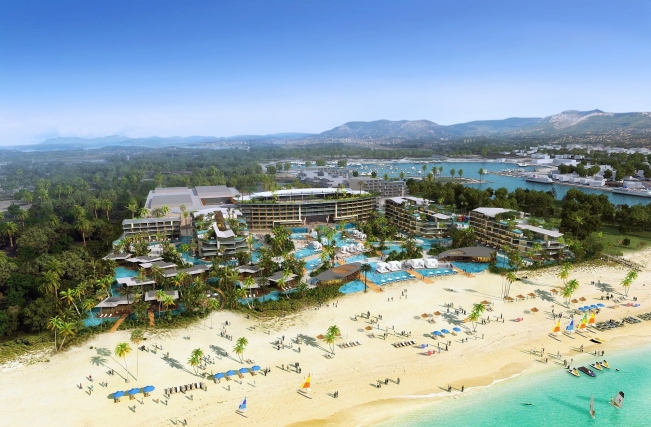 By Susannah Parmenter, Close-Up Media Staff Writer Caesars Entertainment Corp. has reported plans to bring a non-gaming Caesars Palace resort to beach-front property along the coast of Puerto Los Cabos, Mexico. Caesars said the hotel licensing strategy is part of its plan to expand into new global markets. According to a release, the $200 million luxury beach front hotel will be developed by Mexican developer Grupo Questro. Caesars Entertainment will manage the property and receive a licensing and management fee. "Bringing Caesars Palace to Puerto Los Cabos will represent further progress on our strategy to expand the company's non-gaming businesses into premiere resort and gateway destinations," said Caesars Entertainment President and Chief Executive Officer, Mark Frissora. "This resort will represent our first investment in Mexico, and it speaks to the global strength of the Caesars brand. We are looking forward to working with Grupo Questro to create a 5-Star destination that reflects the best of Caesars offerings in the hospitality, dining and entertainment spaces." "We are very excited to work with our new partners to help bring the Caesars brand to Puerto Los Cabos," said Eduardo Sanchez Navarro Rivera Torres, Executive President of Grupo Questro. "Caesars is known around the world, and we are confident that this luxury resort will be an incredible asset for global visitors.” According to a release, the non-gaming luxury beachfront hotel will feature 500 rooms and suites, a 40,000-square-foot convention center, a 25,000-square-foot full service spa, three fine dining restaurants, an array of amenities including an entertainment venue, pools, cabanas, fitness center, tennis courts and access to the two signature golf courses. The beach-front property will be situated in the Puerto Los Cabos Tourist Corridor and the San Jose del Cabo resort city on the southern tip of the Baja California peninsula. Caesars noted the announcement of the Puerto Los Cabos project follows last week's announcement that it will manage two luxury hotels and a beach club at Meraas' Dubai-based Bluewaters Island development. In late 2018, Bluewaters Island is expected to become home to Caesars Palace Bluewaters Dubai and Caesars Bluewaters Dubai - both of which will represent Caesars Entertainment's first non-gaming resorts. In addition to the projects in Puerto Los Cabos and Dubai, Caesars Entertainment has announced plans to build a meeting and conference center in Las Vegas and has broken ground on a new Harrah's-branded casino in Northern California. More information and complete details:
www.caesars.com
www.questro.com ((Comments on this story may be sent to newsdesk@closeupmedia.com))

Expedia.com has released a year-end look at U.S. traveler behavior and trends for 2017, analyzing data to identify the most in-demand destinations, hotels, activities and more.

Among other insights, the roundup revealed: